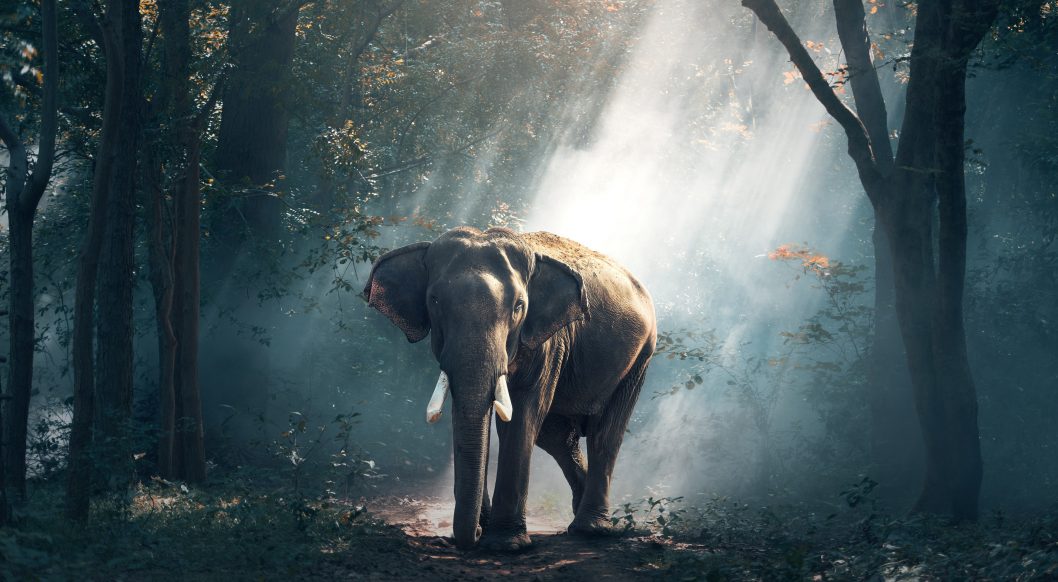 My driver took his axe and hit the back of the larger elephant quite hard. I could see some blood. The large mammal slowly turned his head towards us. I could sense its fury and was very scared. If it attacks us, I’m in trouble and will stamped into the ground by several tons of grey anger.

But the elephant looked straight into the eyes of the little man in front of me, who was probably no older than six years old. The four-legged armoured tank left its head sank and slowly continued its tred through the wilderness.

A baby elephant’s leg is chained. In the beginning it will attempt to escape, but will soon discover that it is impossible. As the yers go by, the elephant has grown into a great powerful animal. It could easily walk away and break the chain. Even more so when there is no chain at all, just as in my story.

Yet, the elephant does not do that. For years, the thought of impossibility has been housing in its mind. At that is what keeps it imprisoned. In an illusion of its own thoughts.

It is the same for humans. We all possess restricted thoughts that we learned when we were young.

However, as with the elephant, what used to be the truth in the past, might no longer be the case.

So is this thought still valid?

Are you not imprisoned by your own illusion?

What is your life’s worth if you remain chained? Is this the example you’re setting for your family, your environment? Is this the reason why you are on Earth?

Choosing for freedom is not easy. Aside from the beating, the chained elephant receives food every day. A wild elephant has to find its own food. It will encounter dangers that will never happen in custody.

If you break away, you will have to make choices every single day, whether you want it or not. And that can be tough, very tough. Is it worth it? You might be surprised, but I honestly think it is not.

Liberation is not the solution. Liberty will give a sense of limitless, an abundance of possibilities. The hedonistic side of it is tempting, but it will never lead to a final desired state. Sooner of later, consciously or unconsciously, it will make place for something bizarre. Something least expected.

Yes. Liberation is ultimately followed by surrender. After the freedom, you will be seeking for new a framework of morals and values. Knowingly or unknowingly you subject yourself to an authority. Again! Whether it is to an economic, corporate, social, religious or philosophical system, or even to an individual or collective of people, we assign something as authority over us.

Back to square one. Or not? I see freedom merely as a first step. Nothing more. However, it does bring something. And that is motion, the essential ingredient for any change.

We have lost contact with our Divine Self. We are lost in an illusionary garden of worldly things. In order to give purpose to our live on this planet, we need to connect again with Ourselves. The first step is to break the chains and start the journey. And that journey is universally worth it.

“The secret of Happiness is Freedom, and the secret of Freedom, Courage.” – Thucydides (460 BC – 395 BC), Greek Historian